My grandma is the perfect grandma. Growing up she was the grandma who didn’t come over empty handed, she always had sweets or toys. She always had time for stories, and to play. She was the kind of grandma who’d take us to the park or the beach. She was a young grandma, which means, she’s a pretty young great grandma, her first great grandchild (my son) was born while she was still in her 60s. It’s wonderful that I’ve been able to share my grandma with my own children and they know her as I’ve known her, maybe with whiter hair and a few more wrinkles.

Now I know my grandma differently, I know my grandma as a mother and a woman. We have coffee and talk about how we raise our children and birthed our babies. My grandma tells me about her own mother and her own grandma, and a strange echo through time starts to make itself known.

We talked about exactly how we pushed out our babies, push by push description as though it was only yesterday she gave birth to her second baby, who was breech, a little over a year since her first baby was born. Every time she’s told me the story of her breech baby’s birth I’ve wished doctors these days knew how to deliver babies breech – or more – how to just stand back and let the mother push her baby out. I’m inspired and jealous that I didn’t get that with my breech baby. But it’s still so cool that her breech baby was on the right side of her belly, head jammed right up inside her ribs and as she told me about that feeling she arched away from remembering the pain of it – and I do the exact same thing remembering Jasper’s head against my ribs on the same side.

We talk about discipline and we can even disagree (respectfully, she is still my grandmother) but we were talking about how ineffective and potentially harmful shouting at children can be and I admitted I have yelled at my kids, but it’s almost always yelling “Stop yelling at me!” and then I realise how ridiculous that is and pull myself up. Grandma told me she could handle most behaviour, she had 5 children, but shouting scrambled her brain – which is how I feel.

We talked about feeling overwhelmed with babies, getting so tired and frustrated that she said she’s had to put her babies in their cots and walk outside into the garden where she couldn’t hear them crying – for long enough to catch her breath. She said either she’d go back and they’d be asleep or she’d be able to try to settle them back to sleep. I can’t imagine my grandma losing her cool, or being a sleep deprived new mum. It makes me feel better to know that even she had human moments. 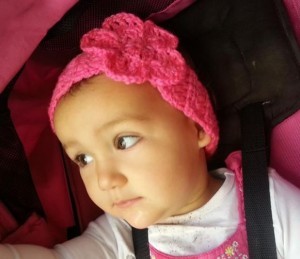 Recently she taught me how to crochet, after years of wanting to learn, I finally can do it! I didn’t know she could crochet, and as much as I’d tried to learn myself watching YouTube, I just needed someone to watch me and tell me what I was doing wrong – which she did, and now I’ve crocheted some hats and head bands and oversized-flowers for said head bands!

Grandma recently had hip replacement surgery, and she’s recovered incredibly quickly, she’s driving again, she baby sat my cousins who are 10 and 12, for a fortnight, running around after them getting them to school and activities – so she’s not at all slowing down. I only have 2 living grandparents, so I can’t not occasionally think about one day she wont be here, but I just can’t imagine a world without her in it.

I look at my grandma and see someone who with even if she wasn’t my grandma, if I met her as a younger woman in a mothers group, I feel we would have been friends. They say “You can’t choose your family” but I’d have always chosen her.

What kind of relationship do you have with your own grandparents?