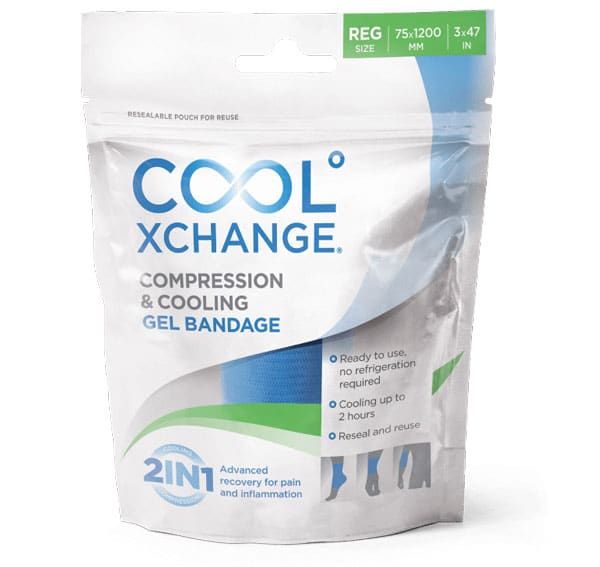 I was recently sent the Cool XChange cooling compression bandage to review.

I feel a little bit under-qualified to write about what is essentially medical supplies – however I can definitely write about this product from the perspective of someone who is incredibly accident prone and inclined to roll, sprain and break my limbs from activities like walking in a straight line on a flat surface.

CoolXChange works on the principal of R.I.C.E (Rest, Ice, Compression and Elevation) which fits with the advice I’ve been given whenever I’ve injured myself.

It uses a gel substance, which admittedly does have a little bit of a disconcerting slimey, but not exactly wet, sensation. It reminds me a lot of the goop in farting putty. It’s not the worst feeling, I’m just letting you know so you’re prepared for it! It feels a little weird – and that’s okay. It’s all part of how it works.

I wrapped it on my own ankle and wrist to test it out and I was surprised by how cool it was after a few minutes – and the weird sensory experience went away too.

The gel cools by evaporation and because it’s doesn’t involve any ice it can be left on for up to 2 hours (Ice can only be left on for 20 minutes at a time). That in itself is appealing because I know when I’ve had a hot, swollen ankle I’ve wanted to keep the ice on for longer than is recommended because it offers pain relief. So being able to have 2 hours of continuous cooling relief is a big plus.

The other thing that I think would be great about using CoolXChange is that it’s cooling and compression at the same time. When I’ve tried to ice over a bandage, the bandage inevitably gets wet – and also it’s hard to keep the ice on the injury. I’ve managed a broken foot and a toddler at the same time, so even time I moved to get something for the toddler (every 2.4 seconds) I’d have to adjust the ice. With the CoolXchange in theory you’d just strap it on and it would stay on wherever you went. It’s also self gripping (no need for a pin or clasp to hold it together) though I found one side was more “grippy” than the other and it doesn’t feel like it would hold on for A LOT of movement – though you really should be resting your injury anyway!

Finally – the CoolXChange doesn’t need freezing or refrigeration. So you can just keep it in the cupboard, car, nappy bag etc and when you need it just open the ziploc bag and go.

The CoolXChange is reusable, but it does need to be thrown out 6 months after opening.

It can’t be washed. It also can’t be covered while in use (or it won’t be able to effectively evaporate) so I can imagine if it’s used on a child it might be hard to keep clean unless you do manage to pin them to the couch.

It can’t be applied to broken skin and it’s not suitable for children under 5 years. It’s also not designed for burns (I asked. I thought it would have been great after my pizza related cooking injury )

Overall I think it’s a pretty cool product and while I’m not actually looking forward to using it on an actual injury (because it’ll most likely be mine) I imagine it’ll be a good thing to have on hand.