This is my gorgeous CC. 4 days old, so sleepy and yellow.

When I was pregnant I daydreamed about the beautiful bond I would create with my perfect little person through breastfeeding.

Of course everyone says it’s hard, it’s challenging, it’s not easy for everyone… But surely for me… I was an exception to the rule… Or so I thought.

Being a first time mum I went out on my merry little way, I had everything I needed, breast pads, a pump, bras, creams, knick knacks and gadgets for the doodad thing. I was prepared, and I was SO sure I was going to give breastfeeding a red hot go.

Of course this isn’t something you know how to do as a first time mother, but my CC must have needed food, so the nurse did it for me, instead of showing me. Let me be honest, I feel like this was the most violating, shocking thing to happen to me. I was prepared for my CC to latch on perfectly, be a dream to feed, and have it all go from there, I was not ready for some foreign stranger to be touching me, even though it is natural and part of her job. I was not prepared for someone to be standing by my bed in the middle of the night milking me like a cow.

I’m so sorry for the awful description, but for me, the first week in hospital, and having 5 different nurses tell me how to feed CC (of course they all had different opinions) was probably the most stressful time of all.

For the first two days I was so shocked that she literally had a few drops of colostrum and she was full.
CC had trouble latching on, and little did I know I left the hospital with a slightly jaundice bub, making her so sleepy that after a few sucks of milk she would fall straight to sleep, thus not getting enough milk to flush the jaundice out of her system.

The nurses didn’t tell me she was slightly jaundice when I was in hospital, but I do distinctly remember one nurse opening the curtains in my room and she said CC needed some sunlight. That was it. End of story.

I left the hospital expressing and bottle-feeding CC. Heart breaking for someone who had such high hopes and strong desires to breastfeed.

I was in touch with a local lactation consultant the first day I got home who made a home trip the next day, and she was the one to tell me how jaundice and yellow my precious bundle looked. As it was a Saturday, she suggested putting her under the window immediately and if no better by first thing Monday to take her to the hospital, as where we live, there is no one who can do the test over weekends before putting her under the ultra violet light.

She suggested continuing to express and bottle-feed as much as I possibly could to help flush out the jaundice, and we would re-visit during the next week to work on a strategy for getting her from bottle to breast.

Finding out that my baby was unwell was just horrible. I knew she was too sleepy, she was a newborn yes, but after two sucks of milk to just fall asleep like she was in a milk coma? No.

Over that weekend I was so stressed, I drank so much water, I distinctly remember filling up my 1.5litre bottle at least once a day and finishing again by night time to make sure I was able to express enough milk. I expressed so much and fed my CC as often as she would allow me, and laid her in her bassinet under our huge glass window. It had worked. By Monday afternoon I felt she was okay, and my lactation lady came back out to see me and agreed she looked MUCH better.

Leila still had huge issues attaching to me, and it was suggested I try breast shields in the mean time. Great, another doodad gadget knick knack to rely on.

During all this, I was experiencing such high emotions. While washing bottles, I boiled them to sterilize, and actually tipped some boiling water on my hand by accident. I was so overtired and emotional I didn’t even cry until my mum came into the room and saw me running my hand under water and she asked me what was wrong, where I promptly burst into tears. Fantastic.

Leila would use the shields on and off, but would fuss and was generally unhappy with this thing she could feel. We decided to just give up breastfeeding and focus my energy on expressing and feeding Leila. This went on for three more weeks before one fateful morning.

We live semi-rural, so on large blocks just outside of town… Apparently our neighbors had just bought a cow, because as it was, 4am in the morning, I hear a cow mooing while I was expressing, and for me this just felt like it was time.

It was by far the toughest mummy choice I have made to date, and CC is now 13 months old. Choosing to give up on something that just wasn’t working for us, even though I had such high hopes and dreams of a beautiful breastfeeding journey. Looking back now, I wish I had have given it a few more weeks. I wish I would have stuck it out with the shields and tried to wean her off them. There will always be a part of me that wishes I was better prepared to face actual challenges, but now a part of me knows with my next child I will know what I will have to face, and can work harder next time to make it a beautiful experience. 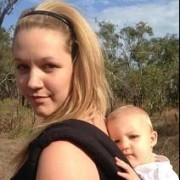 Lauren is a stay at home mum to her beautiful daughter born in 2012, Leila. She am also the owner and creator styling little babes at my very own small sewing business, Ooh La Leila. She certainly leads a very busy life, but also enjoy some peaceful reflection whenever she can.

5 Tips For Breastfeeding In Public