I really don’t know what to make of Maria Kang. I’ve spent some time over the last couple of days reading through her websites, looking at what she’s said in media responses and interviews, and she does appear to be promoting a positive message about mothers making ourselves a priority and taking care of our bodies.

She says on her website that she keeps in shape with regular exercise (30-60 minutes 5-6 times a week) and a balanced healthy diet (she says her meals consists of carbs, lean protein and healthy fats) but she makes a point saying that she does eat fast foods occasionally, she treats herself to chocolate, wine, bread and desserts, she doesn’t weigh herself regularly, she doesn’t count calories, she snacks between meals, she doesn’t do protein shakes or supplements and she tries to get plenty of sleep.

That’s not exactly a cabbage soup diet and 5 hour daily work outs. That to me seems like a pretty sensible healthy lifestyle. It’s the “What’s your excuse” bit that is a pretty obnoxious slogan. I know she’s a fitness person and she has a fitness page and so outside the context of that fitness page it could be that people like me who aren’t in that culture are just taking it the wrong way. I think what she’s trying to do is encourage people to step back and think about the choices they’re making and motivate people to choose a healthier lifestyle. But it does come off a bit smug. A bit “If I can do it, why can’t you?”

Because most people have reasons that they don’t look like Maria Kang, not excuses – Reasons.

I very rarely eat take away, I limit processed and packaged foods, I aim for balanced meals, I occasionally eat pasta, rice, potatoes, I eat bread sparingly, I treat myself occasionally as Maria Kang does with chocolate and wine (and cheese) My exercise comes in the form of walking at least an hour a day, 5 days a week; often with 15kgs of weight resistance (aka baby-wearing a toddler) and also running around after said toddler.

But I don’t look like Maria Kang. Not at all. Not even close. There are things that have happened to my body through pregnancy that simply cannot be undone, and looking around my family, especially at the women in my family, the genetics deck is stacked against me with regards to weight gain. Which doesn’t mean I give up and give in, it means I do the best I can, and accept that this is probably the best I can do – health and wellness is a lifelong commitment to myself and I could probably starve and sweat my way to looking like Maria Kang, before I’d inevitably realise it’s just not worthwhile maintaining for me and go back to what I’ve been doing. Even Maria Kang says “The best diet you can be on is one you can stick to” (see, she actually seems pretty reasonable)

Now, she’s shared another picture with the slogan “What’s your excuse” and this time it doesn’t even look her body. 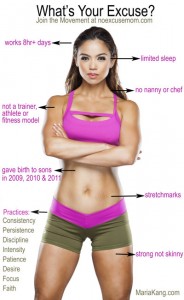 With this second image she can’t say she didn’t know how it would be received and perceived, she knows it’s controversial, she knows it could rile people up, it certainly would be driving traffic to  website – um, like me the last few days – and possibly you (here, check it out)

She’s says this image is not “Photoshopped”, she says it’s airbrushed and that if anything it’s just lighting. Come on, Maria Kang, we have eyes, we can see that the lighting in the picture gives the illusion that your already slim and fit frame is significantly slimmer than it really is. How is this helpful to people who have human bodies, who aren’t walking around with big bright photography lights to shine away our alleged imperfections?

I think the reason I don’t know what to make of Maria Kang is she contradicts herself. She seems to understands that bodies come in all shapes and sizes, she mentions this throughout her website, she says while talking about the importance of self love – “I settled in my belief that my healthy lifestyle would eventually breed a healthy body – and that I would accept my body however it physically manifested.” But I don’t think she understands that people can do what she says she does and not look like her. She was temporarily banned from Facebook after posting a rant starting with : I woke up this morning to news stories about how overweight nearly obese women should be proud of their bodies (as they posed in lingerie).  which she defended by saying “While I think it’s important to love and accept your body, I was a little peeved because while I feel like it’s OK to love and accept your body, I think that we’re normalizing obesity in our society.”

I’m okay with my body the way that it is.

It does what I need it to, it gets me from A to B (I don’t drive, so I rely on my body – well, my legs – as my primary mode of transport)

It grew my children – I feel so much more respect for my body since it made people.

It still feeds my daughter, actually I’ve been making milk for over 5 years now.

My arms are strong enough to carry my toddler, or pick up my 5 year old.

It continues to function moderately well on limited sleep.