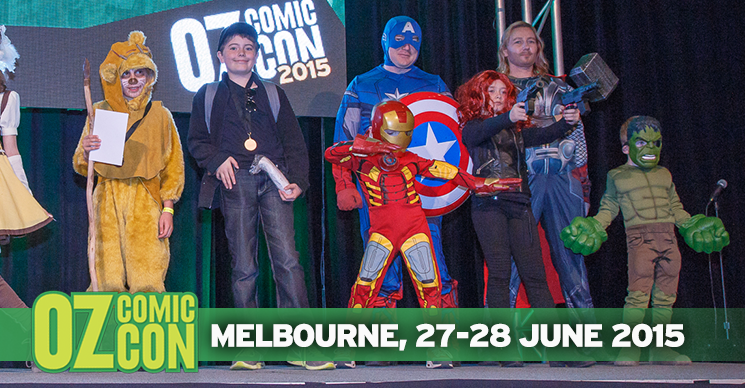 Families looking for an amazing event to kickstart the school holidays need look no further than Oz Comic­Con Melbourne this June. Held on the first weekend of the Victorian school holidays, June 27­/28, it’s the perfect place to bring the kids to start the holidays on the right note.

The best news is that Oz Comic­Con won’t break the budget. Tickets are available now from Show Clix and when you purchase a general admission ticket online, you receive a ticket for a child twelve years or under absolutely free! Infants aged four and under are also able to attend the event at no cost.

Held at the Melbourne Convention and Exhibition Centre on June 27­/28, Oz Comic­Con Melbourne will be a fun­filled event celebrating the absolute best in film, television, anime, comics and gaming. From real life superheroes to colourful cosplayers, once­in­a­lifetime Q&A panels and the chance to meet your favourite celebrities to exclusive memorabilia, Oz Comic­Con is sure to be the highlight of the upcoming school holidays.

Oz Comic­Con Melbourne will host a number of fun features for the whole family to enjoy, including a Red Bull Silent Disco (where kids and kids­at­heart can put on some headphones and dance the day away), a family activity room in which younger children can take part in arts and crafts activities and a dedicated Kids Cosplay Competition for kids who love to dress up and show off their costumes.

Also featured at the event will be a huge range of comic guests that kids will love, including Dean Rankine (The Simpsons Comics), Paul Abstruse and Ryan K Lindsay (My Little Pony) and Brad Walker (Batman: Legends of the Dark Knight, Guardians of the Galaxy). The guest list doesn’t end with comic artists, however, with a huge range of celebrities from film and television lined up to attend to unmissable two day event. Guests currently announced include Jason Momoa (Game of Thrones), Emma Caulfield and Amber Benson (Buffy the Vampire Slayer), David Wenham and Billy Boyd (Lord of the Rings) and Scott Patterson (Gilmore Girls).

For more information, and a full line up of guests, please visit www.ozcomiccon.com