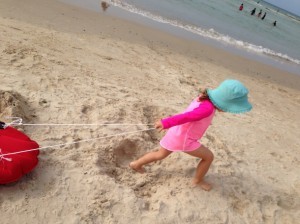 Do Kids Need Daycare For Socialisation?

The past week at the beach, Margo (nearly 4 years old), has been on a serious mission to make new friends.  She’ll spot some kid (usually a girl dressed in pink), who is relatively her age, but often a quite a few years older and says, “Mom, do you see that girl waaaay over there?  Is it ok if I go and play with her?”  Of course, I say yes, if it looks reasonable, and then she bolts.  Leaving myself and her baby sister in the dust.  The whole thing is pretty funny because it just so happens that we took her out of daycare about a month ago and since then she has become MORE confident and MORE natural in social situations (even though she already was pretty outgoing before that).

The girl she asked to play with tonight, at the playground, was a couple years older than her and was dressed in this amazing sparkly frilly tutu.  I could have just imagined myself in the same scenario when I had been nearly four years old… I would have NEVER gone up to a cool looking older girl who was dressed in sparkly frilly tutu to ask if she would play with me!  I just would not have had the nerve!  NEVER!

I’m not saying that pulling Margo out of daycare has made her MORE social.  It could be a pure coincidence that Margo has become more confident and natural in social situations just because of her age or something else.  And, I’m not saying that sending a kid to day care is bad.  But, it certainly is interesting that she could go from never having the nerve to play with other kids in public places to ACTIVELY seeking them out!  I mean, she goes straight up to these kids and starts yapping away, and to any nearby adults as well.  She has all the confidence in the world, but is also very selective in the people she chooses to interact with.  She can tell from a mile away, the right sort of people she chooses to interact with and if a kid is acting funny, she’ll say, “Mom, that kid is crazy!”  She always keeps me in the corner of her eye too, just to make sure I’m watching.  (In only I had eyes in the back of my head, because it’s always hard to watch her being a social butterfly while I’m trying to chase her toddler sister).

About a year ago, I went to a talk by Dr. William Sears.  Somebody asked him a question about kids needing daycare for socialisation and his reply was:

“The only thing kids pick up from daycare are bad habits and germs!”

I had to laugh a little at that one!  Like I said, I really did love the daycare where we were sending Margo, and she never picked up any noticeable bad habit or even got sick from daycare in all of her 2 1/2 years she went there.  But, I’ve often heard parents complain about bad habits and sickness from daycare, so I think Dr. Sears is definitely on to something.

Dr. Sears also talked about creating much better social interactions situations for your child when they are with you, as opposed to daycare.  These interactions are more controlled, as in you usually know the kids and the parents.  He suggested that playgroups, swim/dance/music lessons, outdoors activities, family get togethers, museums, and even just having people over your house, are all great chances for your child to interact with other children while you are present, or only say, in the next room.  It’s also important for kids to interact with children and adults of all ages, to give them a more rounded perspective on different social situations.

Again, I’m not saying I’m against daycare, because many people (including myself) have had no other choice but to send their kids there while they are at work.  But, I really have to say that the theory of ‘need for social interaction’ has just been debunked by Margo this week.  I’m almost certain that the false idea of ’the need for socialisation‘ thing extends to home schooled kids as well!  Of all the homeschooled or unschooled kids I’ve ever met, I’ve never met one that wasn’t confident and natural in social situations.

I better get used to Ms. Social Butterfly, because I’ve heard from my other mama friends, whose kids don’t attend daycare, that it’s quite common for these sorts of social interactions to happen.  My only hope is that I will always be able to drag her home from the beach or the playground when it’s time to go home and eat dinner!

Do you send your kid to daycare?  How easily to they act in social situations?