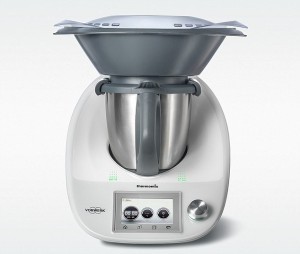 The Thermomix is known for its ability to help you cook up a storm in the kitchen, but the recent launch of the newest model, the Thermomix TM5, has caused a storm of a very different nature.

In a nutshell, the new model was launched by Vorwerk without any advance warning or notification- even to their consultants. Consultants were told to be available on the day for new training and were then told of the launch. Meaning people who had taken possession of their TM31 even up until the day before paid full price for what is essentially a superseded product.

Apparently, Choice and the ACCC have been inundated with complaints about how the launch was handled. From what I saw on social media- there are a lot of unhappy customers who feel they were cheated or deceived because they weren’t told that a new model was about to be released. I can understand that. If I had bought a TM31 a couple of weeks ago, I’d be a bit annoyed that I only had the current model for two weeks! There has been a facebook group started for unhappy customers (with over 2800 members at the time of writing this) and an online petition demanding that the company allow recent purchasers to upgrade to the new model.

So, what’s the difference?

Well, not a great deal, from what I can tell. You can still use the Thermomix TM5 exactly as you would the TM31 if you wish to. It does have a few more bells and whistles and some size differences. The Varoma (steamer) is larger and so is the jug. It now has this cool LCD touch screen thingy instead of buttons and a dial. The seals and way it opens are a bit different, now self-locking, as is the butterfly (whipping) attachment. The biggest difference in how you use it comes from the recipe chip and guided cooking function. Basically it has a port to plug in a “recipe chip” (you get one free when you buy it and I’m assuming others will become available) which displays the recipes on the screen and enables the guided cooking function, which basically tells you what to add, step by step, and automatically weighs and cooks, chops etc you ingredients as you go, which is pretty cool, but by no means essential. I’ve read several reviews and comparisons and thus far and they all acknowledge the shiny new bits. They also all seem to agree- the end result is no different.

Did Vorwerk break any laws?

It doesn’t appear so, though many customers seem to disagree. The company says no, they didn’t. Their response:

The Australian launch of the Thermomix Model 5 was conducted in line with global brand compliance in accordance with our distribution arrangements. We are deeply sorry that this has resulted in some customers feeling disappointed. What are Vorwerk doing about all this? They have made a peace offering, saying customers who ordered a TM31 on or after July 1st to August 20th will be offered a free second bowl, blade and lid set. For the non-thermomixers, this is a set worth somewhere in the ballpark of $400. It means you can switch between bowls to cook larger dishes or more than one dish without having to wash the bowl in between cooking sessions. This sounded like a pretty good offer to me, as a second bowl is something I’d love, but discussion in the unhappy customers group shows the offer is being treated with deep suspicion by a large proportion of their members. The consensus is divided. Some plan to refuse the offer because they feel it is simply not good enough; they feel they should be offered the chance to upgrade to the newer model and that the offer is somewhat of an insult. Others are under the impression that accepting the offer means they have accepted compensation from the company, which they suggest would impact any legal proceedings they might commence against the company.

Personally, I’ve had my thermie too long to qualify for the offer and too long to really feel that I have been cheated or deceived by the new launch. From what I understand, the launch of the TM31, which superseded the TM21, was handled in the same way- no forewarning. According to Thermomix, this is part of their company culture. The difference is, this was several years ago, when social media wasn’t a prevalent thing yet and the Thermomix wasn’t the popular appliance in Australia that it is now. I can understand recent purchasers feeling a bit miffed. I can understand feeling like the company has behaved poorly towards the customers. Many people questioned why they didn’t have a run-out sale on the older model. I imagine this is because of their business model- their consultants get paid a certain percentage per sale, so they potentially stood to lose income if their percentage was coming off a smaller sales figure. They also would have faced fewer sales in the lead up to the launch if people opted to hold out for the new model. On the flip side, I can understand that customers believe they should be entitled to that choice. It’s a tough one, because if there had been a run out sale, the people who purchased full price the week or month before that sale would feel disadvantaged. One idea would have been to announce the new model a few of weeks before the launch and then selling both models for a limited period, with a discount on the TM31 and offering an upgrade option to those who had ordered, but not yet received their thermomixes. But even then- there would be those who wouldn’t be happy if they’d purchased before the announcement. I’m not sure how thermomix could have avoided upsetting anyone at all but it would (in my not at all qualified opinion) have made better business sense if they had proactively tried to minimise the number of potentially unhappy customers, rather than retroactively trying to appease a mass of angry customers, some of whom are now actively talking others out of buying the appliance.

I do think perspective is important here though. Everyone who has purchased or ordered a thermomix based on their demonstration of or research into the TM31 did so because they really liked what they saw. The features of the TM31 are still there- it’s still a great machine and still does exactly what it’s supposed to do- everyone who owns a TM31 got exactly what they ordered. The consultants they ordered from didn’t know the new model was being launched. They didn’t set out to deceive anyone and unfortunately, it would seem the parent company made a decision that has seen a lot of backlash against them.

One spin off from this drama is the shift in the Thermomix community online (yes, we have a community based around a kitchen appliance!). There is currently a very real divide among those who feel cheated or upset by the new model launch and those who don’t think it’s a big deal. The term “first world problem” is getting thrown around. A lot. I hate that term. Yes, it is a first world problem. We are in a first world country. People are allowed to feel upset by this situation. It’s just such a shame to see an online community that is not only divided but turning on itself. The complaints I’ve been reading range from the dissatisfied to the conspiratorial and the responses to them from tolerant and understanding to downright nasty. In my experience, the online community has always been a pretty positive place, with lots of discussion around recipes, health and nutrition and it would be a shame to lose that.