On Friday, Sunrise had a segment about Alexis Alvich, who wrote an article for Yahoo, titled “Beauty after baby: The Honest Truth”

The opening paragraph of her article reads:

“Two months ago, I gave birth to a baby boy. I’m madly in love with my son and feel blessed that I was able to have a child and that he is healthy. I know how lucky I am, but I have to admit that I resent what pregnancy has done to my body. I understand that the stretch marks, scars and baby weight are badges of honor, but it doesn’t really change how I feel.” 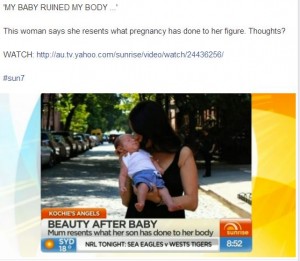 Sunrise reported that she doesn’t feel pretty, that she’s embarrassed to be naked in front of her husband and she’s afraid that she won’t lose the baby weight and the stretch marks won’t fade.

Sunrise shared this segment on their Facebook page, with a quote “’MY BABY RUINED MY BODY” and 2,700 comments later (when I last checked in on it) there is comment, after comment, after comment telling her she should have shut her legs, to suck it up, calling her ungrateful, selfish, vain, saying she shouldn’t have had her baby boy, telling her to use contraception, questioning her ability to raise her son and expressing sympathy for her poor and unloved baby.

There were so many comments along those lines. Many people were also expressing that she should be grateful, because they themselves had difficulty, or have not yet been able to conceive a baby, and I can appreciate that sentiment.

Though as far as I can see she hasn’t said she’s ungrateful for her son, she’s just  struggling to come to terms with the changed which take place due to pregnancy. There’s no point pretending that this doesn’t happen – things change; skin sags, stretches and scars, it can be difficult to lose the weight and while many mothers do reach a place where they are happy with their bodies, pregnancy can never be undone, some changes are permanent and 2 months postpartum and her still not being happy about those changes seems perfectly reasonable to me.

Even if that doesn’t seem reasonable to you, even if you loved every moment of your pregnancy and embrace every change, even if you adopt the line of “I’m a tiger and I’ve earned my stripes!”  telling a mother  she should have “closed her legs” because she’s unhappy about her body so soon after pregnancy is vile.

Every person who said such disgusting things, and the hundreds of people who “liked” these comments should be ashamed of themselves.

And Sunrise should also carry some of that shame, the quote they chose to use to bait such a reaction was “My baby ruined my body” – however even if people were just responding to that one single line, so few paused long enough to exercise even a shred of empathy.

The bottom line is, if you’re not nice on the internet, you are not nice. Saying it online is exactly the same as saying it to someone’s face. So they effectively just looked a mother of an 8 week old baby in the eye and said:

“You don’t deserve your baby.”

“You should have kept your legs shut.”

And by doing so, they just showed who they really are.