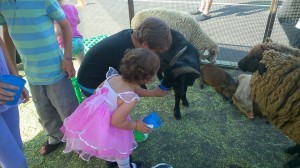 We visited Masters Hardware on the weekend and they were having some celebration, and out the front was a petting zoo and I won’t lie, I was more excited than the children were about the prospect of patting a bunch of sweet, fluffy animals!

I love animals, growing up I always had several pets, my dad often joked we were running a petting zoo. Not all at the same time, but over my childhood I had a few budgies, finches, a cockatiel, I hand raised some native honey eaters, as well as a rescue duckling, we had chickens, fish, yabbies, a blue tongue lizard, a few guinea pigs, a couple of rabbits, mice, rats, dogs and cats.

I was always asking for another, or finding them. My honey eaters were featherless tiny chicks on the ground beneath a broken nest which I found brought home. My dad – who had previously been a park ranger – made sure I was fully aware that they would likely die and it wouldn’t be my fault, it was just a fact of life… a couple of weeks later he made a call to the local wildlife officer to ask “in theory” if someone’s daughter had a couple of native hand raised birds that she was very attached to what would they suggest doing and the wildlife officer responded “in theory” that they would require more time to care for than they had available so if someone’s daughter wanted to continue raising them that would be fine and we could talk about how to release them if they survived. Unfortunately, despite my efforts, feeding them and responding to them around the clock like tiny newborn babies, they didn’t survive until adulthood.

We had some interesting pet dynamics, for example, the bunny would play with the dogs, and they’d play rough without ever actually hurting the rabbit, the dogs and the cats played together, even the dogs and rats would play together, the only trouble we had was the cats wanted to play with the rabbit but as soon as one of the cats would assume a “stalking to pounce” position the rabbit would thump the ground with her hind legs and speed off and hide somewhere in the house – leaving the poor cat confused and rejected by its potential play mate.

Having pets growing up taught me about responsibility, having to care for them, feed them, keep their cages and bedding clean, taking them to the vet for immunisations, check ups and injuries. As well as keeping them happy, exercised and entertained. I learnt some hard lessons about life, and death. Pets don’t live forever – and accidents happen. One of our dogs got away and was hit by a car, which was heart breaking, he was such a sweet-natured, highly strung, not very smart, weird looking creature. He was skinny, small, long-legged, with long wirey fur and a very pronounced under bite with crooked teeth, but he loved being picked up and cradled like a baby, he’d gaze up adoringly for hours – he was wonderful.

But the biggest lesson about the responsibility of pet ownership came with my last dog. I’d gotten her when I was 17, she was a puppy – a precious ball of white and cream fluff. I went to Uni the following year and I was able to keep her as I still lived with my mum, the year after I packed a suitcase and moved interstate. Life was calling me and I left my dog with my mum. A few months later my mum asked what I planned to do with her. I didn’t know. I lived in an apartment near the middle of Sydney with my partner. We spent every weekend looking for a new place to live, something with a yard, something that allowed pets, something we could afford. We were going to inspections and putting in applications alongside 30 other people, we offered above the asking price, we harassed real estate agents, we widened our search area, but we couldn’t get a property that would allow us to keep her. Then I called everyone I knew – anyone who might take her, but nobody could. She was temporarily allowed to live at my partners parents house, but she was getting unsettled there, she was barking, and starting to misbehave. She needed stability. She needed a real home. I ended up surrendering her to the RSPCA.

No matter how many times I ran the whole situation through my head it was the only option we had left. I cried signing the paperwork, while she wagged her tail, sniffing and looking around, she was just excited about going on an outing. There were specific instructions that I would be contacted if she wasn’t re-homed within 6 weeks and I didn’t receive any calls. She was a very pretty, fluffy,  friendly and affectionate. I’m she’d have found a home easily.

But since her, aside from some fish, we’ve not had a pet since. It was 7 years ago.

Seeing the petting zoo, every fiber of my being screaming “I WANT A BUNNY!” but I can’t have one. Until I know that I can commit myself to that pet for its lifetime, it wouldn’t be right for anyone.

So, as tempting as getting the kids a pet rabbit for Easter, we’ll stick to the chocolate kind instead, and I’ll get my animal cuddles by dragging my kids in to petting zoos (I don’t think they really mind that much).

Do you have pets?