I didn’t always identify myself as a feminist, I didn’t identify myself as being anti-equality, but I didn’t think I was or ever would be a feminist. I’d been sold the idea that feminism is man hating, and even woman-hating in that I’d been led to believe that feminists were anti-all-things-that-might-be-defined-as-feminine. I thought feminists looked down their noses at women who wear make up, get married, have children and were stay at home mums.

I was wrong, but the great thing about being wrong is that it’s an opportunity to learn.

What does “Feminism” mean?

“The advocacy of women’s rights on the ground of the equality of the sexes.”

One of the big misconceptions I myself held about feminism was due to its name;  because it’s FEMIN-ism, not EQUAL-ism or HUMAN-ism I wrongly assumed that feminism meant not just equality, but seeking privileges for women.

Feminism focuses on women because globally, and in Australia, women still do not have rights and opportunities equal  to men across a broad range of issues. Despite beliefs to the contrary, feminism isn’t about tearing men down, but in a way, feminism does seek privilege for women – in that women should be equally privileged to men, and not that men should be equally disadvantaged to women. 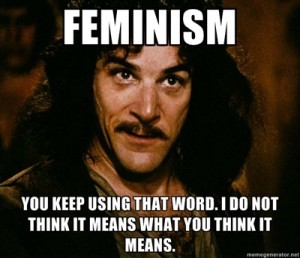 Feminism isn’t hating men. There are not enough words to explain how incorrect this is. Many feminists I know have male partners, who they love, they have sons, fathers, brothers and male friends, and even if they don’t, feminism is not about hating men.

Although a person can identify themselves as a feminist who advocates for women’s equality while being a misandrist (someone who hates men or is prejudiced against men) misandry and feminism are not the same thing.

This is the next thing I struggled to understand initially with feminism-is feminism actually still relevant? I figured we (in Australia) can vote, access contraception, marry who we want, divorce when we want, own property, raise children independently, work in a ‘man’s job and so on – what more could we want?

Though there was a lot of things that I’d accepted as being “the way they are” without really thinking about it. 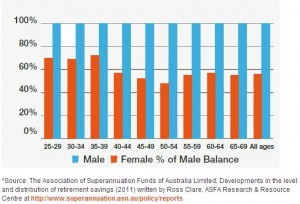 I’d accepted that because I’m a woman, over my lifetime I will likely earn much less than my male peers, after all, women have babies, so of course we should be disadvantaged financially for being mothers, in a way that men are not disadvantaged for being fathers. I accepted that it’s reasonable that at retirement age, that women’s superannuation is a little over half of men’s.

Also when comparing the earnings of men and women, in Australia, working full time, in 2013, women still were paid 17.1% less than men. One reason I’ve seen given for this many times is that woman apparently are less confident negotiating their rate of pay, women are more likely to accept being underpaid, whereas men are more likely to actively negotiate a raise.

If this is the case, then what are we teaching the women in Australia about what they are worth?

Feminism both is and isn’t about men. Feminism benefits men, absolutely, without doubt. Breaking down sexism against women is good for men, because sexism against anyone hurts everyone.

When men are mocked as being incompetent with housework or child rearing, this stereotype negatively impacts both men and women. By setting up men to believe they cannot contribute positively to the running of housework, women are left to do the majority of unpaid labour.

If men are painted as being predatory animals, unable to control their most basic instincts, this both incredibly unfair and obviously very damaging to people of both sexes.

And many feminists ARE men. Feminism doesn’t exclude men, it just isn’t focused on them, because it feminism addresses how certain issues specifically impact women – and there needs to be that space to look at and address those issues.

Children are adults-to-be, so all the gender bias and stereotyping we pour into them now, will come to life as they get older. If nothing else, be mindful of how you use language to talk about gender with your children, and with children in general.

There’s a lot of great information about how to rethink how we talk to children about gender, for example short videos like “#Like a Girl”   or ““How We As A Society Are Failing Our Boys”  or blog posts like “How to Talk to Little Girls”

Also, we need to challenge gender roles, for example this is a page from Big Ws most recent Toy Sale catalogue. This is BOYS TOYS:

Superheros and action figures! Important and brave people who save lives.

And this is GIRLS TOYS:

This is not an isolated way that our future men and women are taught to think of themselves, this is just one very recent, very visual, example.

Even my own son, at 4 years old, was teased by other 4 year olds, for sitting in his sisters pram -because it was pink. From that day on he has refused to eat or drink from a pink cup or plate. Where on earth are preschoolers getting the message that it’s okay to tease their peers for being “like a girl”?

Teaching children that certain toys, clothes and colours are for boys or girls only is unnecessary at best and devastating at worst.

What Can You Do About It?

Okay, NOW you can burn your bra and toss out your razor!

Still kidding (though, feel free to, it’s totally up to you.)

When I first tentatively dipped my toes into feminism (and I’m still barely paddling in the shallow end) I was overwhelmed with how big, diverse, and deeply entrenched the issues surrounding equality for women are, but you don’t have to try to fix everything today.

If you want to host a rally, petition your local member of parliament, get on TV, or run for government to make changes from the top down – do that.

Or, you can start small, and start local, very local, like your own home, family and friends. Talk about feminism, talk about the rights of women, talk about the need for equality, talk about how this impacts you personally and how it affects other people. In some ways the best, and sometimes hardest, thing you can do is just let people know that things can be different.

Keeping in mind this is only a brief summary of the issues surrounding equality and advocating women’s rights.

Below is a list of links to websites, pages and videos relating to feminism and gender equality:

Alternet.org “How We As A Society Are Failing Our Boys” – Video

Youtube – What Guys Look For In A Girl – Video

*TRIGGER WARNING* The below links relate to rape culture, sex and sexual assault. Please be mindful of this when reading.

The Guardian – What Makes a Slut? – Article

ABC – The Danger Of The Monster Myth – Article by Tom Meagher

How To Make The Perfect At-home Espresso Martini