7 Tips for Gently Weaning a Toddler

My daughter is now 2 years old and I’m planning to no longer feed her “on demand”, as the beginning of very gradually weaning her over the next year or so. I did the same with my son, I started to reduce his feed after his 2nd birthday and he was completely weaned not long after he turned 3.

This is so much easier said than done, 2 years of unlimited feeding is a pretty darn good run – you’d think they’d be a little more appreciative and cut me some slack! But for my toddlers reducing feeds has been what I imagine it would be like trying to take away a toddler’s dummy, special comforter, sleep routine and favourite snack all at once; lots of resistance.

I’d also have imagined that weaning, or cutting back feeds, with a child who could talk would be easier, but when my daughter isn’t shrieking like a banshee at me for not giving her a feed, she’s gazing up at me, tapping my left breast saying “Mummy, dis booby, pease?” with love in her eyes and hope in her voice; it’s pretty darn hard to say no!

With both my toddlers I’ve found day weaning easier to start with than night weaning. Yep. You read that correctly – at 2 years of age I approached day weaning before night weaning, I’m still breastfeeding my 2 year old frequently throughout the night, though I don’t need a whole lot of sleep to function, I’m in no way suggesting this is ideal for everyone, this is just what I approached first because it is what is easiest for me.

(Also, indulge me; I want to name all the “techniques”.)

The “Don’t sit down” Technique.

This was advice given to me when first I started to cut back my sons feeds “Whatever you do, don’t sit down”. This is pretty flipping exhausting, but sitting down leads to someone small climbing up into my lap and cuddles in my lap leads to breastfeeding – it’s just how it works. So, we have to stay busy! I find not feeding easier on the days we have plans, we go out, go to the playground, play centre, play date, play group; key word being play, because a toddler who’s busy playing is less likely to find the time to feed.

The “I’m cutting you off” Technique.

If my tot insists she NEEDS a feed during the day, I’m mindful not to just let her feed for as long as she wants. So I only let her feed while she is actively sucking and swallowing. If she is only swallowing intermittently, with long pauses between,  I’ll pop her off. I’m generous, I do give her a second chance if she gets upset, but if she resumes casual feeding then that’s it! Time’s up! (Time to get up, get busy and grab a snack or drink instead!)

The “Have this instead!” Technique.

I try to plan lots of little – healthy – snacks throughout the day, things that might be also time consuming to eat, like cut up small pieces of fruit, sultanas, grated cheese, frozen peas  and corn, etc; something that will replace that “meal” of the feed as well as the time spent feeding, once day weaned though I’ll try to space out her snacks to proper meal times. Also I keep water easily available throughout the day, I find a drink bottle easiest way to do this.

The “Boobies are for bed” Technique.

I tell my toddler that feeding is something that only happens in bed and try to separate the activity of feeding from anything interesting, like no TV, no books, no toys, lights off, just feeding quietly in the dark, though this backfires a little when she starts announcing “Mummy! BED TIME!” throughout the day.

The “Back wrap – Not booby wrap” Technique.

I babywear my toddler, and she believes there are only two different ways to be “worn”- back wrap, and booby wrap…so I don’t booby wrap her (front or hip positions)! By wearing her on my back she can still have snuggles, and physical closeness, without being able to access a feed at the same time.

The “Roll and spoon” Technique.

This is what I started doing long before I actually set myself to the task of night weaning my son, and am currently doing it with my daughter – and I find it’s pretty effective. In preparation for night weaning I’m trying to encourage her to fall asleep without feeding. So, similar to the “I’m cutting you off” I wait until the feeding has slowed down and she’s almost asleep and I unlatch her while also rolling her hips with my other hand to face her away from me, while also snuggling her in close to my body. Sometimes she’ll fully awaken and fuss and roll back to continue to feed, and I let her – and I just wait until she’s sleepy and try again.

Sometimes it takes 3 or so times until she’ll actually settle to sleep without feeding – if she starts getting upset though I give in and let her fully feed to sleep, but generally I find this works so much better than just unlatching her, because if she’s turned away from me she’s less likely to instinctively seek out a feed, also I’m unlatching her without pushing her away. I started doing this a month or so before I actually started “night weaning” my son.

The “Band-Aids over the Nipples” Technique 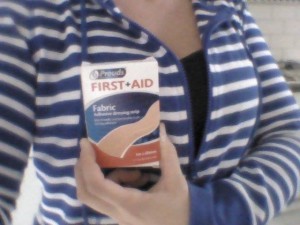 I kid you not this was the biggest part of what made night weaning successful with my son. Because with my nipples taped down and completely inaccessible I was able to cuddle him without any worry that he’d be able to latch himself on. I was able to comfort him, without having to fight with him at all. It did upset him when he found he was unable to feed, but at least I didn’t have to push him away from me at all during the process. I’d remove them each morning in the shower. I recommend a cheap Band-Aid (not a Band-Aid brand Band-Aid ) something that’ll come off easily and it probably goes without saying, but don’t put the adhesive part on your nipple – ouch!