Have you ever played that board game, Fact or Crap? The one where you have to sort out the truth from the absolute rubbish? Christmas is getting kind of like that.

I’m not even kidding. Have you seen the stuff people share online that this time of year? They see it and click share before even the most basic fact-check. I’ve said this before and I’ll say it again: If you don’t Snopes, I’m not sure we can be friends. If you have no idea what I’m on about, here are a few examples:

Share to Agree!!! Or..or… Here’s an idea! If someone wishes you Happy Holidays, you could just thank them and respond with whatever seasonally appropriate greeting that you like. Because saying Happy Holidays is just someone being polite, not a tactical move in an imagined war of Christmas. They aren’t trying to offend you with their secular greeting; they are being nice. They don’t neccessarily know what, if any, religion you subscribe to. In fact, this:

To use a great Australian expression: Yeah, no. If you shared this, you’ve been had. A quick visit to Snopes (Oh, how I love Snopes) will show you that this is rubbish.

Or how about this one?

This one was even reported on in the media. The council was flooded with complaints, as well. All because of a facebook post that they didn’t bother to fact check. The facts are important in this one. Like the fact that there is no Al Shalalah Mosque in Cardwell. 2 minutes on google taught me that.  Google also didn’t have any results for Imam Adnan Janutab- except for this post. Long story short: This is not fact. It is crap. Confirmed by the council itself 2 years ago:

You read correctly. To illustrate this, then we have this gem, which appears each year regarding various shopping centres, but this one is my favourite: 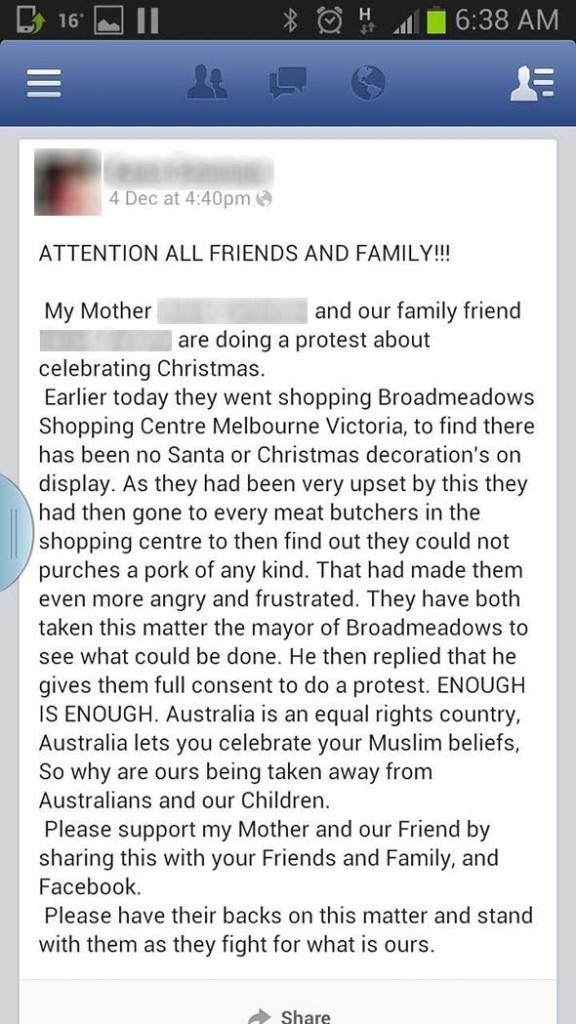 Don’t panic, guys, you can still “purches a pork” from your usual “meat butcher” (…what other kind is there, anyway?) because this is more rubbish. I can only assume it was designed to whip people into a further frenzy over the idea that Muslims in particular are stealing Christmas. However, a fact check goes a long way. They Mayor did not give his full consent for them to “do a protest”because, fun fact: at the time of this particular post, in December 2013, the Mayor in question was Casey Nunn, the 4thwoman to serve in the position.  In this instance, Broadmeadows Shopping Centre responded by telling everyone via their Facebook page about the arrival of Santa to their centre and showing off photos of all their Christmas decorations.

The latest in the alleged war on Christmas is taking place in Victoria, where they have removed special religious instruction from public schools, commencing 2016. Some people have interpreted this to mean a blanket ban on Christmas carols, as well. Take a look at this post from Liberal MP Robert Clark:

The Geelong Advertiser published a story about this very issue. In it, another Liberal MP, Andrew Katos, says that the government is using “tricky” language to cover up a “secular agenda”. Here’s the thing, though. Carols aren’t actually being banned. Special religious instruction is, when it is held in class time. If there is demand for it, it will be held at lunch time or after school. Kids in public schools will most likely still learn a Christian carol or two- just not in a religious instruction setting. The same article quotes the Education Minister, James Merlino, who seems to think this is simply the Coalition attempting to divide the community. He said:

“Traditional Christmas ­carols have been and will continue to be sung at Victorian Government schools, along with other activities, such as colourful celebrations during Diwali and candle lighting during Hanukkah.”

I had a little look for myself and didn’t see anything particularly tricky in the language used. The only reference I could find to Christmas was here:

There is certainly no ban on carols mentioned anywhere. In fact, it would appear that kids will still be taught, by their teachers, about Christmas and other religious celebrations as well. The same article in the Advertiser quoted MP Andrew Katos again, saying the following:

“The Government is trying to implement nonsensical rules over Christmas carols ­because it fits in with their secular agenda. Christmas carols with a ­religious theme such as Silent Night and Away in a Manger would not be allowed to be sung in state schools across Geelong under these rules. Of course, the Government will say that they’re not trying to ban carols and they can be sung outside school times and so on, but they know that’s not going to happen in practice.”

The rules are pretty clear. No special religious instruction. Instead, education, provided by a qualified teacher, on various religions and cultures in state schools. The “secular agenda” reference is interesting as it’s used in a way that implies such an agenda would be a bad thing, but last time I checked, Australia was, and is, a secular democracy. Not a Christian country.

The majority of religious people in Australia identify as Christians, and that is fine. However, the 2011 census showed that 22% of Australians identified as having no religion at all. Percentage wise, this was second only to the number of people who answered Catholic (25%). There are many religions being practiced in Australia, including Islam, Judaism, Sikhism, Wicca and Buddhism. There are even Scientologists and Satanists in Australia (actually, there are more Satanists than there are Scientologists, according to the 2011 census.) In the same census, 0.37% of people identified themselves as Jedis, which equates to over 70,000 people, if you were wondering. My point being that relgions in Australia are pretty diverse, so a secular approach in education, while still learning about religion in a general sense, seems to indicate a more inclusive approach.

We’ve established that there’s no specific ban on carols, but MP Katos argues that the government will say otherwise and defend this by reminding people that carols can be sung outside of school, but he says they know that’s not going to happen in practice. My question is, if this were the case, why not? I mean, if you are raising your child in a religion, is it not your responsibility to teach them about it? If it’s important to you to raise children in your faith, you will do that. Not having religious Christmas carols taught in public school isn’t going to make devout parents abandon their faith or their commitment to the religious or spiritual education of their children, surely?

This article was originally publish by HandbagMafia and has been republished here with permission.