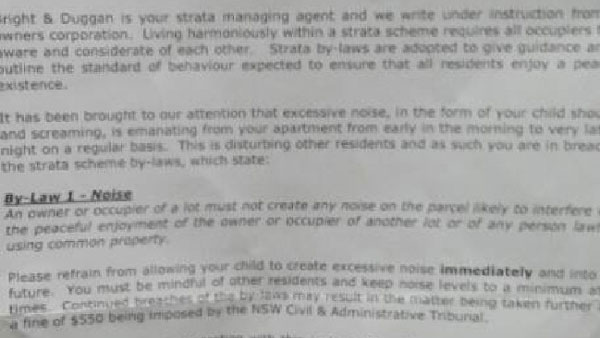 Sydney parents have been threatened with a fine of $500 by the strata company that manages their apartment building. The letter issued to parents of the 19 month old said:

“Please refrain from allowing your child to create excessive noise immediately and into the future.  You must be mindful of other residents and keep noise levels to a minimum at all times. Continued breaches of the by-laws may result in the matter being taken further and a fine of $550 being imposed by the NSW Civil & Administrative Tribunal.” (source)

So naturally this piece of news has sparked heavy debate online about whether or not it’s reasonable to expect that parents refrain from allowing their child to create excessive noise.

I feel like a lot of people have missed this extremely important memo.

Toddlers are also small humans who are found in dwellings such as houses, units and apartments.

Sometimes toddlers live in apartments. Maybe they were already living there when they were conceived. Maybe they just moved there especially to annoy their neighbours. But, they are allowed to live there.

As for being their neighbour – it’s a risk that you take when you choose to live in close proximity to other humans that some of those humans will be small – and so unable to control their noise level.

Trust me, despite what appears to be popular belief – parents cannot actually make them stop doing pretty much anything. They do not come with remote controls, or mute buttons and duct taping their mouths shut is generally frowned upon.

And people of the internet who have children that have never made so much as a tiny, imperceptible peep – your input isn’t helpful. Here’s the thing; with all due accolades to your parenting ability, it’s not because of all the perfect things you did and all the wrong things other parents do that is why your child wouldn’t even wake a mouse and other people’s children seem to be constantly screaming…. it’s luck. You got lucky.

Or, not, because small children expressing themselves isn’t necessarily a bad thing.

I have two children. Two extremely different children, despite the fact I am parent to both of them. Fancy that. It’s almost as if children are their own people who have personalities that do not reflect on me at all.

My eldest was such a sweet, compliant toddler. Boisterous and busy, but vocally pretty quiet. Rarely squawked. We lived in apartment and I had apartment living with a small child nailed. Ya know, because I’m amazing. Right?

Then along comes little miss shrill whirlwind of big emotions that is my gorgeous daughter. Funnily enough she was a very quiet baby. Like, “aww she has the sweetest softest little cry” kind of quiet. Or “OH SHIT I DIDN’T HEAR YOU CRYING FROM THE OTHER ROOM I’M SO SORRY TINY CHILD!”… quiet.

And then she found her voice. 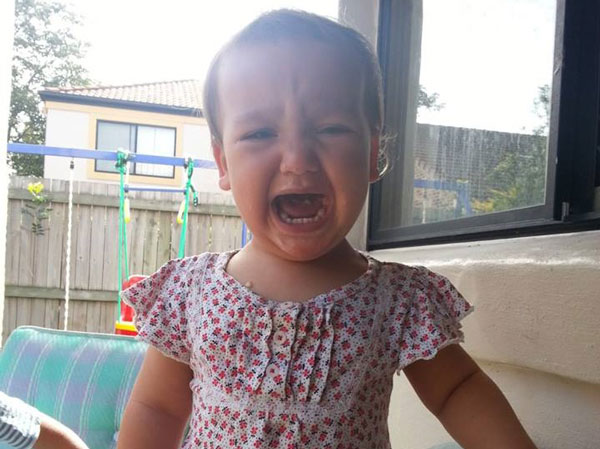 It’s not only loud but it goes up to a pitch that I’m sure frightens dogs in the next suburb.

What am I supposed to do? As previously mentioned the duct tape thing is out – despite all the times I macabrely fantasised about it.

We can do our best, we can tweak their routine, help them get as much sleep as they need,  we can avoid them getting “hangry”, or overstimulated, we can ensure they get plenty of exercise and guide them through processing their feelings in positive ways. There’s lots of things we can try, but they don’t guarantee a quieter toddler.


We cannot actually silence them.

It doesn’t mean we’re bad parents, or failing, or inconsiderate to our neighbours.

And if you can hear a toddler screaming all hours of the night and day, you know what would be so much more helpful than trying to get that family fined? (Because somehow I don’t think adding stress for the parents will actually help the situation)

Knock on the door with a cup of coffee in one hand and a bottle of wine in the other and ask if they’d like some company.